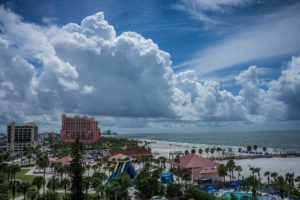 Clearwater Beach Florida has frequently been ranked one of the best beaches in the United States. It’s usually at the top of the “must visit” list of tourists when they come to Tampa Bay. Its Sandpearl resort was named one of the best beach resorts in the U.S. In February 2018, Clearwater Beach was named the best beach in the United States and seventh-best in the world by TripAdvisor. Amid the multitude of hotels dotting the coastline are private single-family homes, townhomes, condominium towers and, on the north end of the island, extravagant, luxury mansions.

Pier 60, named for State Road 60 which terminates in Clearwater Beach, is a central spot for beachgoers and has a playground, a snack bar with attached souvenir shop, and a long fishing pier. There are professional entertainers who perform on the pier every day, along with children’s acts. It’s the site of a daily event called Sunsets at Pier 60, which includes street performers and musical acts. On the pier itself is a nightly display of goods sold by local artisans such as jewelry, candles, and other gift items.

Numerous restaurants and shops can be found adjacent to the beach, whose attractiveness was greatly improved in recent years with a beautification project called Beach Walk. The Beach Walk is located just south of Pier 60. There are drinking fountains, shower nozzles for beachcombers to rinse the sand off, and bicycle racks, as part of the upgrade. It also is a great spot for fishing. Beach “renourishment” efforts such as dune restoration enhance the area’s natural beauty along a wide curving sidewalk. In addition, directly across from the pier is the Clearwater Municipal Marina, which offers deep sea fishing and boating activities for visitors.

Clearwater Beach Florida is in Pinellas County. It’s north of St. Petersburg, South of Dunedin and west of mainland Clearwater. Clearwater Beach has a population of a little more than 107,000 residents.

The Clearwater Jolley Trolley has provided transportation up and down the beach since 1982. It currently runs to North Clearwater Beach and down to Sand Key, including Island Estates. Mandalay Avenue is the main drag on the north end of the beach with Gulfview Boulevard being so on the south. Both areas feature a variety of businesses.

Clearwater Beach Florida has a very active community. The beach community typically co-sponsors events with Clearwater and their residents and visitors participate. There are no shortage of activities going on. They create opportunities for the community to interact, celebrate, and enrich residents’ and visitors’ lives. Some events, like the Super Boat National Championship & Festival, bring visitors from around the world.

Book an Appointment with Realtor Candis

Michelle F.
★★★★★
Largo, FL
Read More
Absolutely amazing. Was very helpful and willing to answer all my questions to the best of her knowledge. Came back to me with more information if she didn’t have the best answers available.

Janet D.
★★★★★
Largo, FL
Read More
Candis was very hands on and always available. She got our home sold and was a huge help in my relocation. We had lived in the same house for 29 years and were unsure how to proceed in our sale. Candis knew what she was doing and steered us in the right direction. She was always thorough in explaining each and every step.

Wayne P.
★★★★★
Clearwater, FL
Read More
My buying experience started rough with an agent who did nothing for me. Then I found Candis. I could tell the difference! She immediately began working hard for me. She is a very educated, helpful Realtor who was always a step ahead! She has a great personality and I recommend her to everyone! Even in a tough market, she made my dream of buying my first home a reality and we closed within 30 days!

Joe C.
★★★★★
St. Petersburg, FL
Read More
Thanks to Candis for helping me find a place to call home. In what can be a very stressful experience, Candis always kept things positive and stayed on track towards accomplishing the goal. I highly recommend her for anyone trying to find the right property. I appreciated all of her market insight and creative ideas for making this property more of a home!

Tasha Z.
★★★★★
Largo, FL
Read More
Candis went above and beyond to help me secure my new home purchase. There were many hiccups we encountered (at no fault of Candis). She worked hard to be an advocate for me through the entire process, even after closing. 10/10 would highly recommend. Working with Candis was like house shopping with a good friend!

Kim C.
★★★★★
Holiday, FL
Read More
It was great working with Candis. She really cares about her clients and what they want in a home. Her professionalism is top notch.

Tina P.
★★★★★
Clearwater, FL
Read More
Candis has a very happy personality that is so refreshing! If we had questions, she was there to answer. And she worked well with our loan team! In this extremely difficult housing market, Candis kept us positive and patient and we finally got an offer accepted on our first home! If you are looking for a realtor, Candis is the perfect one!

Charlotte B.
★★★★★
Largo, FL
Read More
We were moving from CA to FL and Candis made house search over the next year so easy. All we had to do was tell her what we were looking for and she did all the work! She made us feel like family and went above and beyond to help find our perfect house. Candis truly is an upbeat agent who listened to our needs and wants while her fun and positive attitude made her a joy to work with. And her honesty is refreshing.

Paul & Barb L.
★★★★★
Largo, FL
Read More
We connected with Candis when we visited open house. It was our lucky break! She never made us a feel like just a commission, nor was she impatient as we dragged out the process. She took the time to understand our wants and provided insight, opinion and reassurance throughout the process. Her experience and knowledge were very helpful and she was patient with our many changes in direction. She exceeded our expectations!

Vicki & Daryl H.
★★★★★
Harbor Bluffs, FL
Read More
Candis Carmichael is a fantastic realtor. Her positive outlook paired with her professionalism is a great combination! She is smart, experienced and knowledgeable. She was in constant contact with us and always returned emails, text messages or phone calls in a prompt manner. My husband and I would recommend Candis whether you are buying or selling your home.

Ron & Charlotte VB
★★★★★
Largo, FL
Read More
REALTOR Candis is a true professional Realtor. She listens to your wants and needs, then goes out to find what you asked for. She has local knowledge of all areas (which helped with our relocation from out of State). Candis responds to all phone call and text messages within a short amount of time.

Melody H.
★★★★★
Pinellas Park, FL
Read More
REALTOR Candis is a consummate professional who guides you every step of the way and beyond the sale. She is detailed, personable and always your champion. I can't say enough about REALTOR Candis and would whole-heartedly recommend her to anyone seeking to sell or buy a home.

Kim & Ray L.
★★★★★
Largo, FL
Read More
She is a great realtor! She listens and truly wants to help people find their forever homes. She's smart and a go-getter and we greatly appreciate everything she did to help us quickly find and buy our new home. She thoroughly explained everything during the process, answered our questions and gave great suggestions. If you want someone who cares and will truly work for you, Candis is who you need! She really is awesome!

Jane & Dave H.
★★★★★
St. Petersburg, FL
Read More
We appreciate that REALTOR Candis was genuinely concerned with helping us find a home. We had been blown off by other agents, owners and managers who who kept stringing us along only to tell us they sold or rented out the house. Thank you!

Daryl H.
★★★★★
Spring Hill, FL
Read More
Candis was recommended and after meeting with her, we were quickly impressed with her professional manner and knowledge of the areas where we were looking to buy.
Previous
Next

I help my clients realize their dreams of buying and selling wonderful properties.

As a Pinellas County resident of more than 23 years, I have lived, worked, and socialized in the local neighborhoods.

I’ve watched Pinellas County grow from a small college town to a bustling metropolis, home to fine dining, art and culture experiences and some of the most beautiful beaches in the country.